Observing and analyzing the structure of most of big cities in the world, it is obvious that a common characteristic emerges, the urban canyons, similar to natural canyons. An urban area consists of buildings that form the urban surface that repeated is actually the urban canyon. Different heights, lengths, building spacing form geometrically different urban canyons that require different approach. The urban canopy layer is the layer of air from ground to roof-level in an urban area and because it affects the temperature, the air quality and the wind speed, it contributes to the wind funnel (or channeling) effect. This dissertation using tensegrity systems as design tool tries to investigate the capabilities of these systems to mitigate this phenomenon that has not been thoroughly explored in urban areas.

Generally, the funnel effect describes the phenomenon where winds will tend to increase in speed as they squeeze through narrow valleys and it can be explained by Bernoulli’s theorem. According to this, the pressure is least where velocity is greatest and in the same way pressure is greatest where velocity is least. The same phenomenon can be observed in urban areas and especially in city center where the built density is higher than in rural areas (Fig_06). So, referred to urban areas, the funnel effect, or double corner effect is where two adjacent surfaces squeeze the air between them, resulting in an increase in wind speed (Reiter, 2010; Abohela, 2012). The wind can accelerate between linear urban arrangements and create an unpleasant and a lot of times dangerous environment for the pedestrians. When designing an urban space, knowledge of wind pressures, speed, velocity is often required to allow the prediction of “well-use”. Even in existing spaces and environments the data in these conditions are useful in order to locate problematic areas. This kind of data can be generated either through wind tunnel measurements or computational fluid dynamics (CFD) predictions. The wind data can be found out by these techniques even in the scale of pedestrian level evaluating the flow of wind and analyzing the outdoor comfort criteria. (Wu et al., 2012). 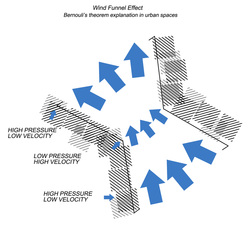